Prenuptial Agreements can be strong and useful planning tools, just like wills and trusts. They can protect family businesses and inheritances, and can help couples plan their lives together. When prenuptial agreements are created collaboratively, families are strengthened because everyone has a voice and buy-in to a clear plan for their family. Below we answer some common questions about prenuptial and postnuptial agreements and how best to create them. 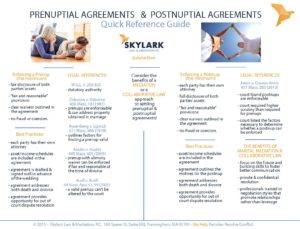 If you would like a copy of our quick reference guides or more information please do not hesitate to call us at 508.655.5980 or e-mail us.

What is a Prenuptial Agreement?

Prenuptial agreements are authorized by statute in Massachusetts:

“At any time before marriage, the parties may make a written contract providing that, after the marriage is solemnized, the whole or any designated part of the real or personal property or any right of action, of which either party may be seized or possessed at the time of the marriage, shall remain or become the property of the husband or wife, according to the terms of the contract. Such contract may limit to the husband or wife an estate in fee or for life in the whole or any part of the property, and may designate any other lawful limitations. All such limitations shall take effect at the time of the marriage in like manner as if they had been contained in a deed conveying the property limited.” – Mass. Gen. Laws C. 209 §25

Why would I want a Prenuptial Agreement?

There may be a number of reasons you may want to consider getting a prenuptial agreement. While they may involve difficult conversations and many people feel they are “unromantic” and start off a relationship on the wrong foot (or continue them on a bad note), prenups are also a place for two adults to honestly and openly discuss real-life financial issues that all couples will face at some point or another in their relationships. Some benefits to forming prenups include:

Is my Prenuptial Agreement enforceable?

In Massachusetts, prenuptial agreements are enforceable, provided your prenup meets the requirements laid out below. The Osborne case from the Supreme Judicial Court of Massachusetts (the highest court in Massachusetts) in 1981, was the first case to hold that prenups are enforceable in Massachusetts. The court held that “an antenuptial contract settling the alimony or property rights of the parties upon divorce is not per se against public policy and may be specifically enforced.” Osborne v. Osborne, 384 Mass. 591, 598 (1981). The Osborne court reasoned that there was “no reason not to allow persons about to enter into a marriage the freedom to settle their rights in the event their marriage should prove unsuccessful.”

Courts will consider several factors in order to determine whether a prenup is enforceable. An enforceable prenup must be valid at the time of the execution of the agreement, and fair and reasonable at the time it is being enforced.

The prenup is considered valid when there is “fair disclosure” of the parties’ respective assets at the time of signing. In Rosenberg v. Lipnick, 377 Mass. 666 (1979), the SJC clarified that parties must disclose their assets to each other before signing a prenup and also listed other factors the court could consider in deciding whether a prenup should be enforceable. The factors the court should consider are whether:

Can I contract for child support or other child-related issues in my prenup?

Can we Mediate our Prenup?

Mediation and Collaborative negotiation both support relationships through interest-based negotiation so they are ideal for creating prenup agreements.